The QBE Sydney Swans Academy was established in 2010. It provides a high-level junior development program and plays a leading role in building and maintaining a strong AFL culture in NSW.

There are 800 male and female players in the Academy each year, aged 11 to 19, and every player takes part in weekly training sessions which are age-appropriate, professional and engaging.

Players from every one of those regions have progressed to the ranks of professional AFL football over the past 10 years.

Academy members are selected through annual open assessment trials, run each year for both boys and girls.

Squads are larger in the younger age groups then become more streamlined in the older age groups, as players who are genuine AFL draft prospects enter the QBE Sydney Swans Academy’s elite pathway.

The Academy curriculum emphasises personal development as well as sporting development, and Academy coaches instil the values of discipline, commitment and enjoyment of the game.

Our aim is to increase the number of skilled Australian football players from NSW, and to grow the national talent pool. 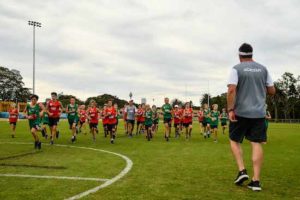 The program for female footballers has almost trebled in size since it began in 2018. This year, for the first time, the Academy includes female players aged 16 to 19, mirroring the boys’ program.

The Youth Boys Academy program runs for 22 weeks every year, from February to September. In the older age groups, from U16 to U19, players train for 30 weeks a year, including a pre-season program.

The program involves weekly training and match-play sessions, providing players of all ages with a mix of skill development, fitness training and high-level competition.

All players in the QBE Sydney Swans Academy also continue to play with their local club or school side. 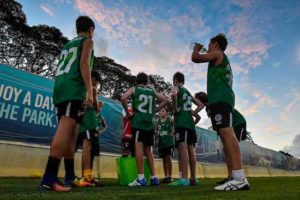 Donations to the Foundation go directly into supporting the running of the QBE Sydney Swans Academy.