After 12 weeks of training, the 130 girls showed how far they have come since they were chosen as part of the Academy’s inaugural Youth Girls program when the QBE Sydney Swans Youth Girls squads played their final Academy Cup games on Monday.

Academy general manager, Chris Smith, said the girls – aged 12 and 13 – had improved markedly since their weekly sessions began in May.

“Their kicking is longer and more accurate, and they are reading the play so much better than when we started,’’ Smith said. “There are a number of girls who attack the footy really hard, which we love to see. It was a great start, and there is a lot of potential among the group.’’ 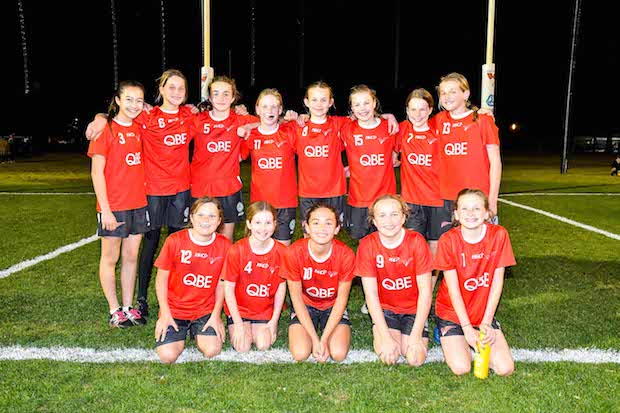 Back row, from left 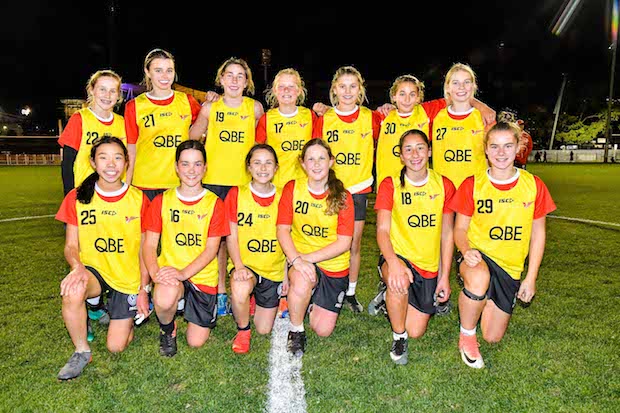 HIGHLIGHTS FROM THE FINAL 2018 SESSION

The highlight came on Monday when the girls from across the Academy’s regions – the Hunter, Illawarra, Sydney city, Sydney south, Sydney north and Northern Beaches – came together for the final 2018 session at Lakeside Oval, opposite the SCG.

With Swans coach John Longmire and assistant coach, Brett Kirk, watching on, the girls were sorted into even teams for the inaugural QBE Youth Girls Academy Cup finals.

The U12 Academy Cup was won by the red team, with gutsy Lily Cyron a standout, despite the fact she was close to the smallest player on the team. She was strongly supported by the red team’s rucking specialist, the talented Sienna Julian.

In the U13 final, the yellow team was dominant. Sienna Perdis and Imogen Brown showed their pace and got plenty of the ball, while Samia Chrara, playing for the green team, took a number of strong overhead marks.

Swans 2005 premiership hero, Nick Davis, who was umpiring the finals, was impressed by the girls’ developing skills and competitive spirit.

“It’s fantastic to see how much they’re enjoying their football, and how willing they are to listen and learn,’’ said Davis, who is the talent identification manager for the Swans Academy.

At the end of the final session for 2018, Chris Smith emphasised that the Academy’s takes a long-term view of development. He told the girls that if they want to improve and possibly play in the AFLW in the future, the key is to practice on their own and handle the football as often as possible.

“The most pleasing thing about our first intake in the Youth Girls program was their athleticism and their willingness to be coached,’’ Smith said.

“Our overall priority has been to teach the fundamental skills of kicking, handball and marking, the same as we do in the Youth Boys program.

“At this stage we prioritise skill development over anything else. Teaching game plans and more sophisticated ball movement will come later when they can execute their skills consistently, which also mirrors what we do with the boys.’’

All 130 girls will stay in the program until they are at least 15. A new U12 group will be added in 2019, and they will be selected through open assessment trials next month.

“It’s been a fantastic first season for the Youth Girls, and we’re looking forward to building on the program next year.

“We want to thank all the girls, and their parents, for their enthusiasm and commitment over the past three months.’’

This article was originally published by the Sydney Swans on August 24 2018 and reproduced with full permission for the Sydney Swans Foundation. Read the original article here: Youth Girls Shine in Academy Cup Finals