For Philippa Power, the Swans are in her blood.

A weekend trip to the Lake Oval was a ritual for as long as she can remember, and she became the first person to leave a bequest to the Sydney Swans Foundation. 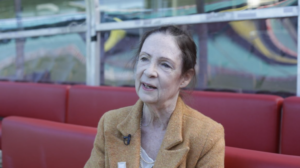 Here, Philippa recalls the personal significance of the 2005 Grand Final, talks about the AFL word spreading throughout NSW, and early life lessons learnt at the Junction Oval.

My Mother was from Sydney. She didn’t know anything about football but when she fell in love with Dad she fell in love with the Swans, so my earliest memories are at the Lake Oval with my Mum sitting in the Cricket Members’ stand, Dad standing down the front with his childhood friend watching the footy and my brothers wearing their number 14 jumpers.

Watching the footy was very much a family thing and it was very much a community thing too. It was the usual pastime for most people that lived in South Melbourne on a Saturday afternoon, and it’s actually not unlike when I sit here at the SCG and look around at the at the families and the people who follow the Swans.

The 2005 Grand Final was my Mother’s last game and she obviously waited all of her Swans supporting life for that, and it was a very important family moment for all of us, a moment sometimes we thought would never come.

2012 was a special win for all supporters, but particularly for me because I had the honour of being the number one ticket holder in that year and I went to every game. I was there with my brothers and sister – both of our parents of course had died by then but it was a very significant game for the family and it was a wonderful year – probably one of the happiest years of my life.

An early lesson in my life was learnt at the Junction Oval. I can remember when I was quite young probably about nine or ten, seeing Bobby Skilton being carted off during a game against St Kilda. Eric Guy knocked him out. My Father stood up in the middle of the cricket committee room and yelling, “You rotter, you rotter!”. Eventually were asked to leave. But I learnt from that you should stand up for what you think.

I decided to leave the Sydney Swans Foundation a bequest in my Will. Ten years ago I saw an advertisement in the Swans magazine about the foundation and shortly after that I met Foundation Chairman Peter Ivany. He explained his vision for the foundation and for an Academy eventually, and I thought well what have the Swans given to me? A life of ups and downs that I thought perhaps I could repay in some small way, so I decided to make a bequest because of our family’s long life connection.

Supporting the Academy players is important to me. For that reason I became a donor to the Foundation. The thing about being a donor is you can see the net result of your gift every season – whatever the foundation does has real benefit to the club, and you can see it every year.

The benefits of the Academy go far beyond the development of young players. Of course, we’ve had a few outstanding people, such as Isaac, and now Callum’s come along and, of course, Brandon Jack before that, but also that it’s a way of growing the game in New South Wales. Every boy who joins the Academy brings along his family, his mates, his girlfriend; they all learn about the game of AFL, so it’s a way of developing the game in New South Wales.

The Swans have given me a great deal of joy and i’m sure other supporters who’re looking at the website would have experienced the same joy that I have, and in making a bequest you really want to pass on to those you love to share that joy with that your children or grandchildren; a legacy that’s going to ensure that they will continue to have their joy and so in giving to the foundation you actually ensure that those who loved the Swans will be able to continue to love the Swans in the way you have, so it is in a sense a bequests to them and to those who share your passion for the Swans.